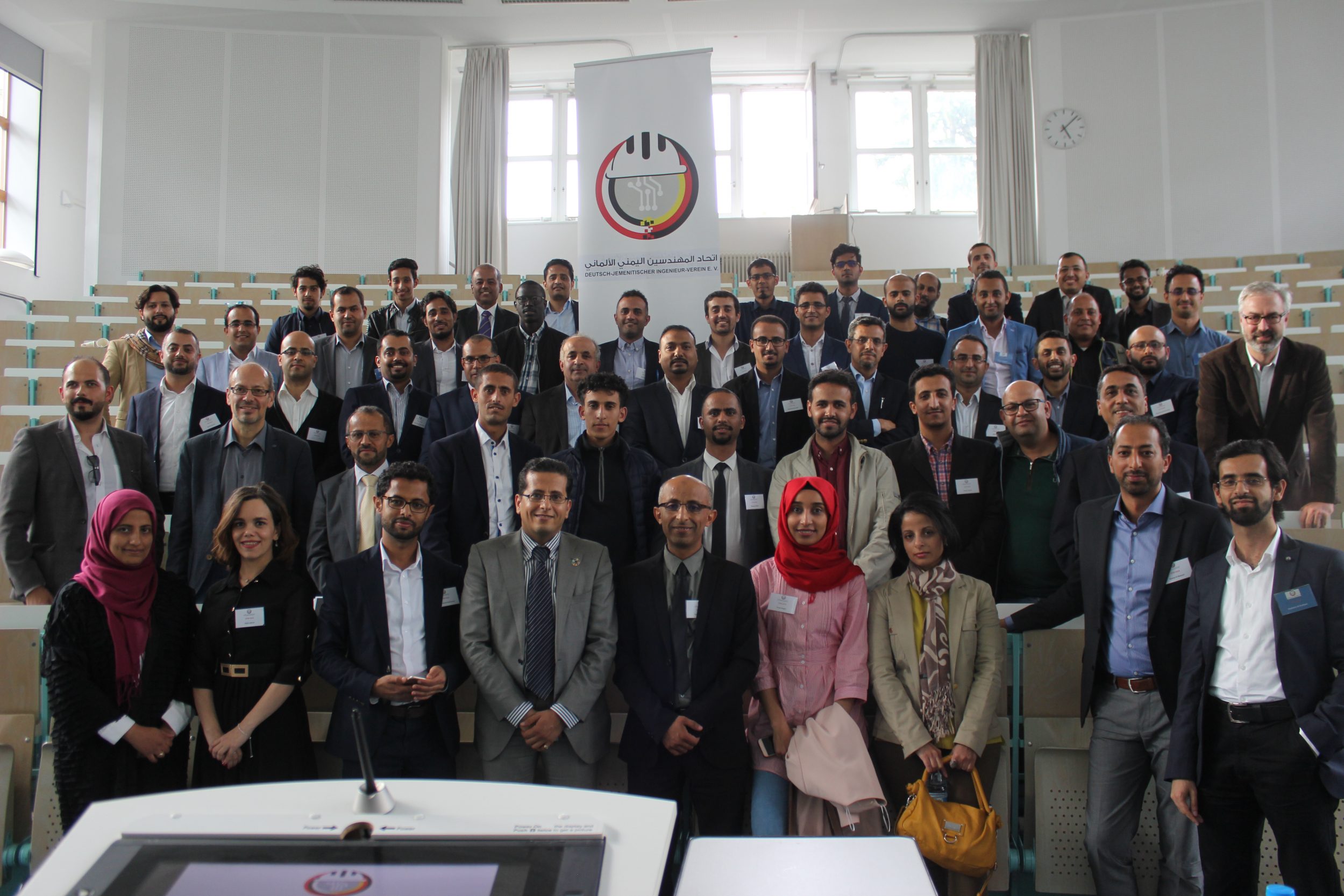 The second DJIV Technical Meeting (DTM 2018) – organized by the German-Yemeni Engineering Association (DJIV) – took place in the German capital Berlin from September 22-23 under the motto: “Promotion of German-Yemeni cooperation to restore the Development in Yemen in academic and technical areas ”.

The first DJIV Technical Meeting took place in Bonn last year, where a highly qualified group of Yemeni engineers and scientists gathered. The goal of this meeting was to establish the first foundation stones for future events. As part of the planning for the DTM 2018, the main goal was to open new horizons for the cooperation between the DJIV and German organizations in the field of international cooperation and to promote the restoration of development in Yemen in academic and technical areas. In addition, the secondary goal of the DTM 2018 was to strengthen communication between Yemeni scientists and engineers in Germany and in the other European countries.

The program of the event consisted of three sessions.

In the first session, Dr. Samih Al-Areqi (Chairman of the DJIV) presented the vision and strategy of the DJIV for the coming years, which will be based on strengthening the cooperation between the German and Yemeni organizations in the academic and technical areas. Afterwards, Professor Hilal Lashuel (EPFL, Switzerland) gave a lecture on “Why the world needs Yemen”. His lecture focused on sustainable cooperation between Yemen and Germany as an alternative to the previous aid programs, which are only a temporary solution to the problems in Yemen. The second lecture was given by Dr. Bassim Aklan (second representative of the DJIV) held an ongoing collaboration between the DJIV and the German-Yemeni Medical Association (DJAEV). This cooperation involves providing technical advice to the DJIV engineers in the field of medical technology, whereby the devices donated by German hospitals are checked for their functionality before being used in Yemeni hospitals, and these are prepared for export. In addition, the DJIV engineers can work with local Yemeni engineers to help install and maintain these devices in Yemeni hospitals.

In the second session, Dr. Christian Hülshörster, Head of the South Scholarship Programs department at the German Academic Exchange Service (DAAD), talked about the current activities and funding programs of the DAAD in the Middle East and the possibilities for providing special scholarship programs for Yemeni students and academics. In this context, he referred to the difficulties in obtaining sufficient funding from the German government to grant Yemeni students more scholarships who would like to come to Germany to study or for those who no longer have scholarships here in Germany due to the bad political situation Preserved situation in Yemen. However, he emphasized in his speech that the DAAD is currently working to overcome these difficulties and to encourage Yemeni and German organizations to ask the German government to offer special scholarship programs for Yemeni students. These special scholarship programs are intended to enable management skills to be mastered in the next phase after the war crisis in addition to academic achievements.

Then presented Dr. Samih Al-Areqi, the DJIV chair, the project “Partnerships between German and Yemeni Universities”. In his presentation, he pointed out that the DJIV wants to use the rapid technological advance in the field of online education platforms (MOOCs) to offer university courses for students at Yemeni universities organized by Yemeni academics outside of Yemen. The session then ended with a brief presentation by the Deputy Mr. Achim Schlott of the German-Yemeni Society (DJG). He explained the prospects for cooperation between the DJIV and the DJG. The DJG is one of the oldest organizations interested in strengthening cooperation between Yemen and Germany and is still working today to highlight the cultural aspects of Yemen in Germany.

In the last session of the first day, Dr. Volker Hamann, head of the project “Increasing the employability of Yemeni youngsters in secondary school age” at the German Society for International Cooperation (GIZ), gave a lecture on the development projects that his organization is currently carrying out in Yemen. Although the German GIZ employees had to leave Yemen because of the war, the organization continues its development projects in Yemen with a large number of Yemeni employees. He also discussed the possibilities of cooperation between the DJIV and GIZ in future projects in the areas of solar energy, public health and rehabilitation of Yemeni women. Then spoke Dr. Marwan Dhamrin of Toyo Aluminum K.K., Japan, on the future of solar energy in Yemen and the challenges it faces, including the lack of a regulatory body to protect consumers from deceived products (batteries), the lack of licensed training programs, and the accreditation of workers in the solar sector. Afterwards, Mr. Dawud Ansari of the Energy Access and Development Program (EADP) presented an efficient economic model for the use of solar energy in Yemeni rural communities. This model is based on the sale of the surpluses that the rural house generates from solar energy to neighboring houses whose energy production does not meet their needs.

The program on the second day included a number of interesting scientific lectures. The first session started with a lecture by Dr. Akram Alomainy of the Queen Mary University of London on the use of electromagnetic technology in healthcare. He highlighted the accelerated progress in the use of nano-sensors to study the internal organs of the human body. This information collected by the sensors enables doctors to gain insight into the condition of these organs for the precise diagnosis and early prevention of diseases. Then Dr. Bassim Aklan from the Clinic of the University of Munich presented a new therapy method for patients with soft tissue sarcomas. In this therapy, hyperthermia is combined with either chemotherapy and / or radiotherapy. During this therapy, the tumor volume is locally heated up to 43 ° C in order to sensitize the tumor cells to chemotherapy and radiotherapy. To reduce the side effects of aggressive chemotherapy, so-called liposomes (nano-particles) filled with tumor poison and contrast agents for MRI imaging are currently being developed in order to be able to deliver the poison precisely and locally to the tumor cells.

In the second session, Prof. Ralf Borndörfer from the Free University of Berlin and Zuse Institute Berlin presented mathematical applications on route optimization in transport and aviation. In a research project between his research group at the Zuse Institute and Lufthansa Systems, Mr. Borndörfer developed efficient algorithms for calculating the shortest flight routes between two airports. Then Dr. Omer Alkhnbashi from the University of Freiburg on the applications of computer science in biology, especially in the field of DNA modifications. He gave an overview of CRISPR-Cas 9’s gene modification technology, which is a bacterial defense method that removes DNA from attacking viruses. Finally, Dr. Mohammed Alrifai from Volkswagen AG gives an overview of artificial intelligence and machine learning. He then discussed the key differences between the different methods of machine learning, namely unsupervised learning, deep learning, and reinforcement learning.

In the last session of the second day, the following Yemeni students who won the Best Thesis Competition organized by the DJIV were honored.

The winners of the first three places received certificates. The first winner also received a prize of 300 euros. The winner of the first place presented his thesis in a short lecture. Afterwards, DTM 2018 was concluded with a meeting of the DJIV members, in which the comments of the members about the course of the event were discussed. After that Dr. Khaled Rashed appointed as the organizer for the next technical meeting (DTM 2019). At the end of the meeting, the first representative of the DJIV, Dr. Adel Al-Hezmi, the agenda for the upcoming annual general meeting in March 2019. He also discussed a draft for developing a project selection system and assessing DJIV readiness to implement these projects.

We can sum up that the fundamental success of this conference was to bring many Yemeni academics and engineers together with German experts in the field of international cooperation to one place in order to enable joint work opportunities to restore development in Yemen. However, we can also say that this conference was also successful in that the DJIV board received official invitations from the DAAD and GIZ to hold talks on the identification of specific projects within the framework of the collaboration between the DJIV and these two organizations.

Before completing this report, we would like to thank everyone who campaigned for the success of the DTM 2018, in particular the speakers from the Yemeni scientists and engineers and the representatives of the German organizations. Special thanks go to the Free University of Berlin, represented by Prof. Ralf Borndörfer, who hosted this event.

Last but not least, this event would not be possible without the great voluntary efforts of the organizing committee, represented by its chairman, Dr. Kamal Al-Bawani and his members Dr. Samih Al-Areqi, Dr. Bassim Aklan, Rami Alareki and Khaled Al-Hushibiri, who have been preparing for the conference since the beginning of 2018.

We hope that our efforts will be rewarded with success in implementing the results of the conference. In our view, this is the most difficult task that will require concentrated efforts in the future. We therefore call on all DJIV members to volunteer in our club for the good of our homeland and the society in which we live.